Context:
Out from a deep slumber, the Food Safety and Standards Authority of India has gotten into a hyper active mode. It started with discovery of Maggi making us eat poison. Soon it turned out, half the products that we daily depend on for maintaining our lifestyle are fucking with us one way or another.

Aftermath:
Some people have stopped using some of these products. But the most visible and loud portion of Indian humanity – the upper middle class that is active on social media – has responded in a surprising fashion (and hence this blog). They feel cheated! They sense a rat – not in the product, but in the discovery. They have responded with a sense of loss. They see it as an an unjust act of aggression by the government. They see it as an attack on their way of life.

What does this reaction mean?
1. People trust companies more than government in India.
Edelman’s trust barometer had found out that earlier. But this episode truly reflects the extent of trust that people have in India towards companies and distrust of the government machinery. Even when told about the mortal danger that these products pose, their instinctual reaction is not of running away from threat, but to question the findings. (arm chair restless souls that we are – conspiracy theories are our digestive tracts for consumption of inconvenience.)

2. Convenience is important.
It underlines how integral ‘convenience’ is becoming to our lives. We will trade convenience over quality of life. Even then inconvenience is not strong enough a trigger for people to react. (People do not even react to injustices around them. People only react to threats to their own identity or to the ideas of their utopia.)

3. Identity preservation over life preservation.
Most importantly, people reacted the way they reacted because they saw the discovery as an inquisition over  their way of life. Its not just about the product or its consumption, its the sense of belonging to the world of the makers of these products. This upper middle class got into the upper middle class because their papas (and a few mamas) had a job with these companies institutions. MNCs typically paid more, paid on time, were fair enough in their dealings and maintained the supremacy of English language. MNCs were doors to the best of the west.  The English speaking children of this generation have grown up in image of the branding efforts of these companies. People chose to identify themselves and their lifestyle not with their own acts or rituals, but with acts of their consumption of MNC brands. “I love my maggi.” “i poop apple.”

And hence calling into question a brand is akin to calling them out as idiots, which they obviously resist. When someone says that Maggi has poison, their identity preserving part of the brain says – ‘That can’t be true. The poor maggi (the poor choice of mine) is being framed.’ The identity preserving part of the brain deflects the darts – with conspiracy theories, with blame game, with pointing fingers, with ennui. 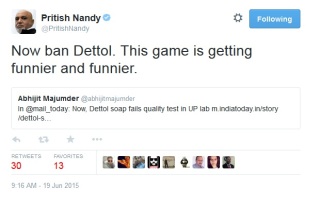 There very well may be many questions that need answering – quality of food safety department’s work, more funding for them, vested interests..
But no matter the impetus, the fact remains: maggi has lead. lead is poison. hence say bye bye to maggi. It doesn’t matter who instigated the inquiry or what lead to the finding of lead. All that should matter is that the food has lead.

Maggi’s reaction by itself is disingenuous. They say that the lead in maggi is well within permissible limit. So I googled what the limit is. WHO says that ‘There is no known level of lead exposure that is considered safe.’
Essentially, maggi is bullshitting us. and that is a bigger worry than this one instance. It shows that Nestle does not respect lives and would resort to lies and half truths if it helps them in feeding us dangerous junk.

The takeaway:
Why bother wasting time and thought with conspiracies?
The only relevant question here is ‘will it kill me?’
Long term or short term doesn’t matter. If it intends to kill you, you run away from it or you kill it. You don’t sit and ask its back story.
And once you kill it, you may work towards making the system work better or punishing the smaller culprits in conspiracies. Don’t loose focus you gadfly.