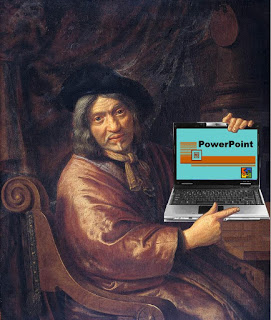 Men in air-conditioned glass boxes often feel the need to powerpoint. This might be because what they want to say (or what their counterparts want to hear) is not well formed enough. And saying it simply will unravel the artifice.

Powerpoint in that sense is a tool that holds together the artifice. The red ribbon on top of a decorated gift package which possibly holds junk inside. Or the shiny credit rating that hides the shitty credit quality of CDOs.

You might now say that – “No no, it is only a tool. It depends on who uses it for what purpose.”
Wrong. The medium is the message. And the message is ‘suspension of disbelief’.
Here the medium necessitates one speaker who often is standing to deliver the message and as such gets into an authoritative position and the listeners have to hold their horses and give their attention to the presenter for a period of time. It gives enough space and time for the con to take effect. The medium of powerpoint intrinsically creates an imbalance. Even when a powerpoint is sent over e-mail, it is not read as you might read a normal mail. It is still being presented to you in your head. There is a certain suspension of disbelief before the show begins.
Secondly, the linear quality of the narrative favours certain kinds of arguments more than others – deductive over abductive for example.
Imagine a typical presentation being discussed instead by the streetside or in a cafe. The listener won’t just listen then. He/ she will interject, question the logic, the premise or simply might look away if he/she finds the whole thing a sour adrak. It is the real world, the hustle, the con has to be that more earnest.

The beauty of powerpoint is in letting the time slow down and place settled and enclosed. With a powerpoint, even a shy young kid with little knowledge can demand attention of a CEO. Powerpoint ‘scaled up’ the business of conning! Now more people could con, even when they didn’t know they were doing it. It made con artists of people who didn’t know that they are being turned into one.

Powerpoint exists in the service of the economic bubbles. The tool that lets reasonable men assume that there must be solid rationality behind the shiny proposition being presented to them. And the reasonable man who assumes that what he is presenting is rational ‘enough’.