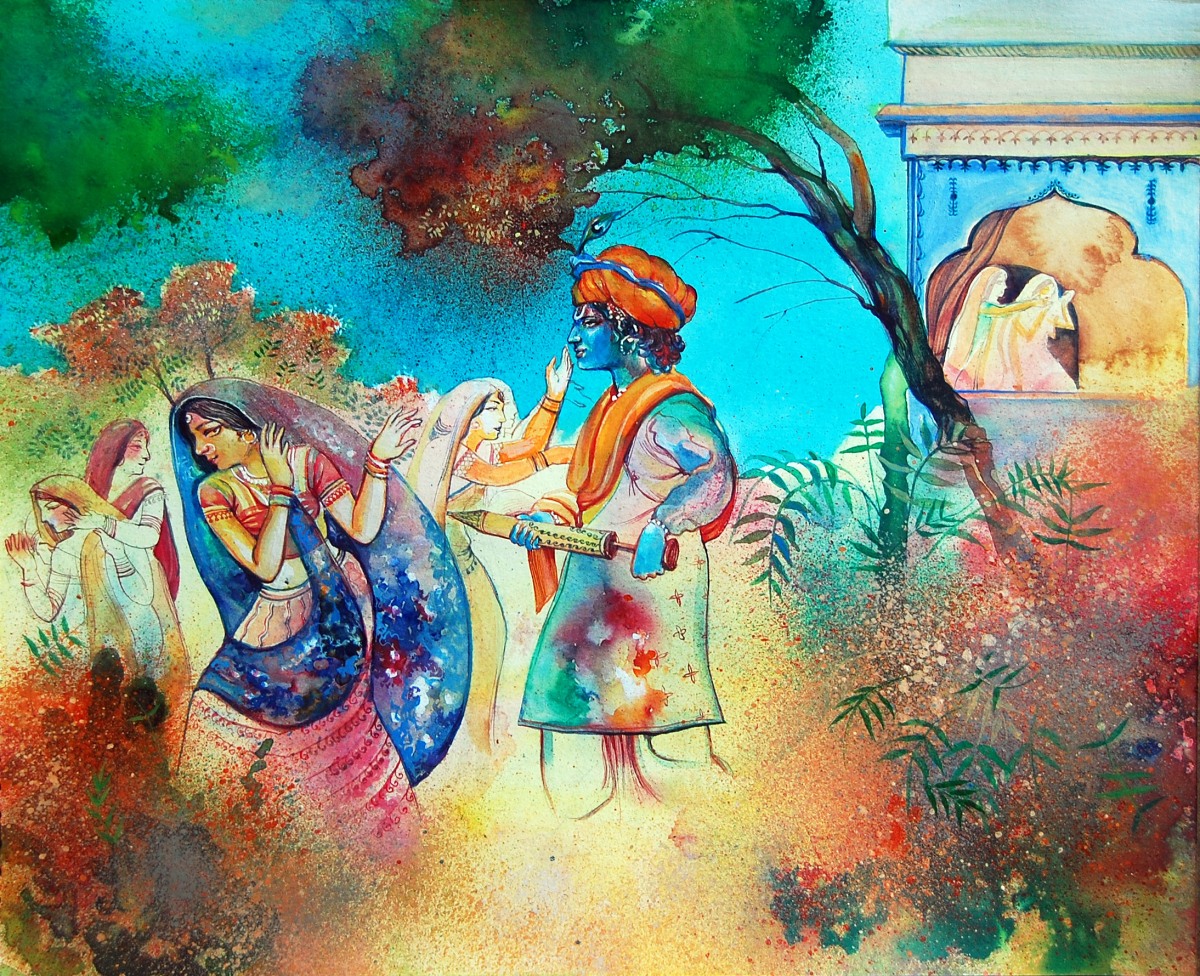 Its Holi time. 🙂 The best time (for some) to be in India. It is a global party to prepare ourselves of the terrible weather that will soon turn us into homebodies – scared of stepping out in the day time 45 degree dust bowls. One last day of being out and enjoying it – beat the heat with style.

Social media, the zeitgeist barometer, though indicates a different Holi to me this year. On the one hand, there are people talking about the HoliCow party – stripping holi to its most basic ritual, and turning it into a modern dance banality. And on the other, there’s concerned city folks who are advocating abstention from the whole thing – save water/ “Think of the poor” – droughts across India/ natural herbal colors as replacement for the more energetic color+water combination.

(Should we blame this on ACs? I have a hypothesis – Holi will be played more vigorously in towns where there is low penetration of Air-Condition machines. There is a correlation between ‘forever weather’ (AC) and demise of ‘weather/ time rituals’ (festivals such as Holi.). (note to self – death of time.))

Both attitudes indicate a basic degeneration of the festival. I would concern myself with the later for this post.

Old tradition – the sacrificial lamb on the altar of new gods
The Hindu society has no crucifixion equivalent central narrative of a knowing and willful sacrifice (not that I know of). But with the western media consumption, there is an appreciation for such a sacrifice and an implicit sense of sin, though it might manifest differently.
“Ecology is the new opium of the masses, replacing religion” says Slavoy Zizek.

So what that means in this context is – the original sin now, is towards nature – we feel that we are creating an ‘imbalance’ with our acts of excess and dereliction of our effects. While, this sense of original sin towards nature is now almost universal, the implication in India is new.
We (urban Indians) are ‘sacrificing’ our festivals and rituals at the altar of our new religion – ecology.

Yes. we must be more conscious of our consumption, but how is it that this dialogue surfaces only in the context of our traditions and rituals? It never occurs to people to switch from shower to bucket bath, or from car ride to bike ride (or even better, bicycle ride), or from wasteful quick service restaurant food to traditional foods. (served in plastic v/s metal plates. excess tissue papers/ no tissue paper.)

It seems that the modern ecological consciousness activates itself only in offense against the traditional practices. It seems that urban India can only see modernity and traditions as  dual opposites, (even as they lamely try to negotiate between two)

Sacrifice of the other
The urban thought culture sees traditions in context of the other India – poorer, backward, the one that needs to learn from the urban.
(cracker less diwali, colorless holi – Project deIndianisation. Q: ‘what did you do in Diwali?’ A: ‘saw TV’).
(Either objectify – holi in vrindavan with firangs. or strip it of its meaning – holi in HoliCow in Delhi with EDM playing)

The operative assumptions (wrongfully) are
Traditions = non urban India, aspirations = urban India
the sacrifice must come from this other India that doesn’t know better. (would you dig a mine under marine drive if you find oil underneath?) (power outages – 0 hours in Mumbai, 15-18 hours in many villages)

A possibility
How about exercising moderation always? don’t kill our festivities, kill the wastage.
Being able to waste is a sign of wealth, so people have incentive to waste.
Brand wasters as idiots. go ahead, next time you see someone wasting food/ water/ electricity – call him/her an ‘idiot’.
Shift the object of our offensive from our traditions to our excesses.
Stop being a spoil sport. Go play Holi.

Saw ‘pom poko‘. Its a story of how an able, happy community of tanukis face their extinction in the face of rapid urbanisation that causes the loss of their homeland, their lifestyle and their food.

Its really amazing how Japanese movie makers so empathetically voice dissent while fully cognizant of the futility of it all. The sense of capitulation at the climax of many such movies are scripted in a way to invoke not a sense of loss, but a sense of preservation of whatever small life, pride and identity is left. Under the mask of laughter, there is a vigorous attempt at forgetting the loss and making the most of the present. I wonder how deeply has Hiroshima affected the Japanese psyche, or does this sense of ‘interal triumph in face of imminent capitulation’ goes beyond Hiroshima, in their amazingly rich culture?
____
while thinking of this, got reminded of the Japanese response to the Tsunami in march 2011. Had read about their belief of ‘wa wo mottte toutoshi to nasu.’ (regarding the importance of consensus and harmony) that was the hallmark of the amazingly dignified response to the catastrophe.
But while this consensus and harmony was exercised by Japanese in the face of a disaster, the disavowal of the same principle led to the nuclear disaster. At the heart of nuclear technology is the removal of natural effects from the equation of harmony. Without clear answers about nuclear safe disposal, its risk, the modernity bogey has been pushing the world to consume more n more of energy.

Modernity first erased nature and life of animals from the equation of ‘consensus and harmony’. While most ancient cultures through out the world appreciate the importance and relate to a life of co-existence with nature, the ‘New world’ methodically reduced the world outside of humans to nothing more than a ‘resource’.
As the resource got scarce, the second wave of reduction from the equation came in the form of negating certain sets of people from the consideration of ‘consensus and harmony’. So adivasis, minorities, eocnomies outside of the connected world… started facing the ‘othering’.
As the pace of change accelerated, there remained no place for the equation at all in the world. The world is now an anarchy of economic interests. The world does not recognise any other interest at all. Its a blind raging animal. Its like the rabid dog, that is driven to its doom.

____
Originally published at The rabid dog.

Ordinariness has such melancholic grace to it. Perhaps, its the finality of its evident fall that leads to submission, that stillness.

Just saw the movie ‘The illusionist‘. Its script was written by Jacques Tati, one of the most wonderful film makers ever. Most of his movies are keen empathetic witnesses to the effect of modernity on a simple human existence. When I saw his movie, ‘playtime’, I was spellbound with the many layers of stories woven in a comic portrayal of  a man navigating a modern city.
Watching the Illusionist, reminded me of the fragility of our identity. The movie is about a magician who is finding it more and more difficult to get work due to advent of modern entertainment of rock music and television. One scene is especially telling, when people in the cities are not at all interested in his acts, while in a village in Scotland, his acts gets appreciated. A woman tags along being awestruck with his ways. He tries to earn more to keep her happy, but she finds happiness with another young man. His fragile existence, a function of a bygone era, is erased when he puts a note to her saying ‘magicians do not exist’ and leaves. He sets free the rabbit that had been his trusted aide in magic tricks for years. One is left wondering, what is he going to do with his life now? But no such worry seems to paint his face. He has simply accepted the end of his identity as a magician.

It made me wonder about my own career too. Since I was a kid I have always known exactly what I want to do with my life, and how I want to lead it. The conception of a life was blamelessly grand and simple. It was simply a business between me and ‘the world’. Of course I was born for greatness.

But somewhere along the way came the question of money and debt. And now what must be done is to judiciously carve a route that will keep me as close to my desired life while being able to earn enough money too, without the aim of greatness. (well, towards nothingness really. more about it later.)

A few years of walking the safe path and you start appreciating the hardship that you are not compelled to do. Hence the simplicity of labor becomes all the more alluring. But great things are simple too. and though they are alluring, your safe distance keeps you away from greatness too. You know that you are not Ajinkya (Invincible). That you are quite ordinary really. And all of a sudden, life becomes so much easier. The self-imposed weight now lifted, you can aim of nothingness and be happy.

But then my chosen identity, that of a ad man, is so fragile. I was in that industry for a while, and now intend to get back into it for good, but our addiction for change will force extinction of my identity as a planner too in some time.

Well, good then. It makes my life easier really. It took a long time for me to accept career as a industry and a role. Earlier, I could only imagine career as what I would learn and how that will shape my life and experiences. I guess, the later view of career is better. I do not remain susceptible to times then. My life doesn’t remain just about my labour then.
After-all, I am more than my 10 hours of weekdays.

Originally published at On how it is ok to be ordinary